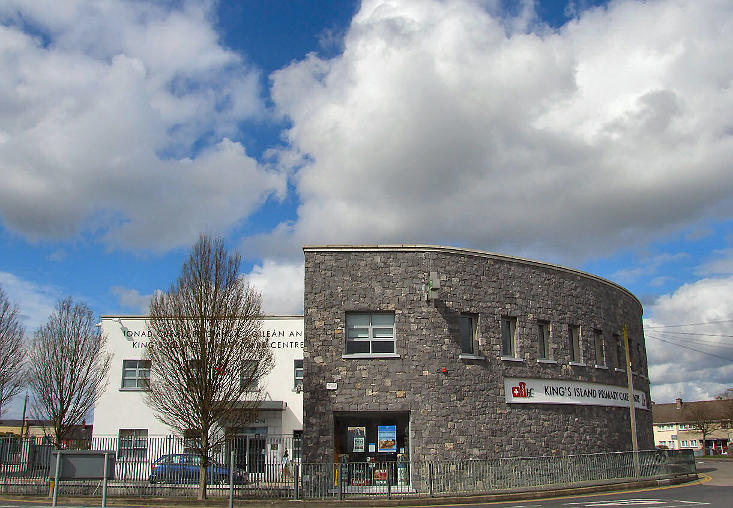 King's Island Medical Centre offers a wide range of General Practitioner, Nursing and other medical services to the King's Island community and beyond.

The HSE provide an extensive array of services from King's Island Primary Care Centre, in which King's Island Medical Centre is based. For more information on these services please click below :

We are here to help

Please feel free to contact us if you have any questions or would like further information - we are here to help.

This email address is being protected from spambots. You need JavaScript enabled to view it.

This email address is being protected from spambots. You need JavaScript enabled to view it.

information about our location

Other Services at KIMC

“Strange how history was to repeat itself in more recent times when the Department of Health would not continue to finance the Hospital, over 100 years later. The Hospital was to close on the 31st of March, 1988, in spite of widespread support from the citizens to retain it – rationalisation was to winThey had been in the 'LL' but I could not make email contact on my Lap Top. on the day. But even so, Barrington’s has risen once again from the ashes like a phoenix, to be available now as a private clinic for day treatment. Originally, the priests of St. Mary’s Parish looked after their own parishioners who were patients there and if patients were there from other parishes, the priests from their respective parishes were called in cases of emergencies. This was not a very satisfactory position, so in due course, the priests in St. Mary’s became the official Chaplains, with Sunday Mass in the Hospital. When the Hospital closed in recent years, some memorabilia were donated to St. Mary’s Heritage Centre in the Town House, such as, the early rising bell for nurses, and a plaque with a list of prize-winning nurses of the year and a photo of the Management Committee.” (From “Light on the Past” by the late Canon Brendan Connellan).

SEVERAL BANKS AND BUTCHERS IN KILKEE:

“All in all, as we have seen in describing Kilkee in 1841, the town was very well provided for as regards shops. In fact, in some respects it must have been unique. In 1842 we are told that it contained twelve banking establishments. This number may seem very high, but it is rather moderate when contrasted with the town’s eighteen butchers; and the trade of all these must have been done almost entirely with the visitors. Many, if not most, closed in the winter. Miss Knott noticed a rather unusual practice of some of the local butchers in trying to sell their meat. On the day before a cow was killed it was driven from house to house to give the people a chance of admiring it and informing the owner which part they wished to be supplied with. Despite increasing business, local traders had to deal with one major obstacle. Many families were inclined to bring their own provisions with them from Limerick. As a result, we find advertisements stressing the point that the quality of goods obtainable in Kilkee was just as good as anywhere else and that they were as cheap as in Limerick. In fact, as Pat Kean pointed out, the person who bought in Kilkee saved himself the cost of freight and risk of damage.” (Extract from, “A Holiday Resort before the Famine,” by Fr Aloysius Murphy.)

“The Church of Ireland Bishops lived for years in the Bishop’s House in Church Street, in a castled house that may date from the 17th century. From a deed relating to the house dated 1763 indicated that it was inhabited by the Protestant Bishop, and there is an earlier indication of a stone house in that area occupied by Bishop Edward Sygne under the Act of Settlement in 1662, thus it may well be the oldest occupied building in Limerick; a claim made for some other old buildings as well.
The structure of the house is a bit similar to the Town House in St Mary’s Church grounds which is a Palladian style house, of which there are many to be seen in Scotland e.g. at Kirkconnell, Dunfries) built about the same time. The Palace is renowned for the famous ‘ghost’ the Bishop’s Lady, supposed to have been seen by ‘Drunken Thady’ in the bard of Thomond’s epic poem.”

“The Protestant Bishops lived there until they moved up town to the more fashionable quarters of New Town Perry in Henry Street. The house became a tenement which housed many well known families in the early 1900s until it became derelict when the Limerick Corporation took off the roof. In recent years the Limerick Civic Trust have restored it to its former glory, and it is now a show piece, greatly admired by locals and visitors to King John’s Castle, which is still awaiting a proper stone facade. Limerick Civic Trust is using the restored building as their headquarters.” (Yet another fine nostalgic piece from a book researched and compiled by the late Canon Brendan Connellan in 2001).

In recent times, Michael Tracey has taken a huge leap into the renovation of his popular premises on Nicholas Street. As where it was formerly a grocery shop, plus Deli Counter and Coffee and cakes sit-down area, it had now been magnificently transformed into a spacious Restaurant. This has been a huge undertaking on the part of the youngest member of the Tracey family, whose parents, Paddy and Bernie ran a highly successful shop on Castle Parade prior to the opening of ‘the Ring Road.’ It is good that Michael has retained the grocery section, as people had become so accustomed to getting the basic items in there. Of late weeks yet another addition has taken place, as Tracey's now have ample outside seating close by, at the top o Convent Street.

Our local playground which opened recently is proving a major source of enjoyment to many children. At any hour of the day you will see them enjoying themselves and I must admit that there is no more cheerful sound than that of children enjoying themselves.

If you are not currently a patient with King's Island Medical Centre and you would like to enquire further, please feel free to contact us directly.

Here at King's Island Medical Centre we are proud members of the King's Island community. Here you can find useful links, local news and information about the history of the area.